Incentives, IP and smaller companies: the story of Lysogene

With over 7000 medicines in development, new treatments will continue to change patients’ lives; slowing disease progression, avoiding illness and reducing overall costs for healthcare systems. But developing a new medicines is a long, complex and risky process with no guarantees of success. Over the coming weeks we look at number of new medicines and role pharmaceutical incentives or IP has played in their development.

Founded in France in 2009, and employing 18 staff at the end of 2017, Lysogene specialises in gene therapy targeting rare, neurodegenerative diseases. It is expected that the one-time gene therapy treatment will replace the faulty gene with a healthy copy of the gene thereby stopping the progression of the disease. Lysogene is using adeno-associated viral (AAV) carriers that have demonstrated their effectiveness in safely delivering genetic material to the human central nervous system. The virus is made harmless by removing its own genes (those that would cause a viral infection) and replacing them with the healthy copy of the missing gene, and injected directly into the brain of a patient in one neurosurgical procedure.

In 2011, Lysogene was authorised by the French AFSSAPS to launch the first paediatric, intracerebral administered gene therapy in Europe. The trial was successful with five years safety follow-up. Initial signs of efficacy were observed at one year post treatment, but not sustained due to the low dose used as per authorities’ requirements at this time.

The impact of the diseases on patients, families, healthcare systems and society

One of Lysogene’s experimental new therapies targets the cause of mucopolysaccharidosis IIIA (MPS IIIA), a rare condition also known as Sanfilippo type A syndrome. Due to a defective gene children with MPS IIIA do not produce enough enzyme activity to break down a substance in the body called heparan sulfate. As heparan sulfate accumulates, affected children become severely mentally retarded, are slow in development, and show increasing behavioural problems, including temper tantrums, hyperactivity, destructiveness, aggressiveness and sleep disturbance. The life-span of an affected child does not usually extend beyond late teens. MPS IIIA affects about 1 in 100,000 new-borns and is inherited in an autosomal recessive pattern. There is currently no approved treatment. 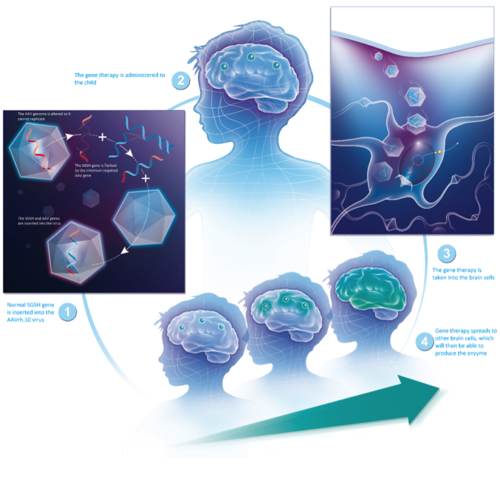 *Illustration by courtesy of Lysogene: How will gene therapy work?

Lysogene’s second development program is for the treatment for GM1 gangliosidosis, or Landing disease. This is an inherited disorder that progressively destroys nerve cells (neurons) in the brain and spinal cord. It is estimated to occur in 1 in 100,000 to 200,000 new-borns, and is characterized by severe cognitive and motor developmental delays, resulting in the death of most patients at a very young age. Patients have too high levels of a brain lipid which is indispensable for normal function, but whose overabundance causes neurodegeneration, resulting in severe neurological symptoms. GM1 gangliosidosis can be classified into three major clinical phenotypes according to the age of onset and severity of symptoms: Type I (infantile), Type II (late infantile/juvenile) and Type III (adult). Affected infants have profound intellectual disability, and may develop skeletal abnormalities and seizures. There is currently no treatment.

For the ongoing development of potentially life-changing one-time gene therapies for neurodegenerative diseases, Lysogene collaborates with some of the world’s best research laboratories, scientists and clinicians. Thanks to strong strategic positioning, ground-breaking science and an established IP agreement for the AAVrh10 vector for the MPS IIIA program, the company attracted respected investors, including the French venture capital firm Sofinnova Partners, BPI France’s Innobio and Novo Seeds.

Next to the patent protection of their technology fuelling venture capital investments, Lysogene rates the incentives and designations received from the European Commission as highly beneficial for their business model:

The SME designation allowed the company to benefit from administrative fee reductions for a variety of processes and licenses.

The EU Orphan Drug Designation (ODD) has been obtained yielding benefit of increased protocol assistance (a form of scientific advice) and, once the medicine is commercialized, 10 years market exclusivity. For orphan medicines, fee reductions are also in effect for regulatory activities including protocol assistance, marketing authorisation applications, inspections and annual fees. Next to the immediate monetary benefit, protocol assistance is beneficial for raising venture capital with the understanding that incorporation of feedback of internationally renowned experts increases the likelihood of regulatory success for novel therapeutic approaches.

Lysogene is also currently working with the European Medicines Agency (EMA) and Paediatric Committee (PDCO) toward an agreed pediatric investigational plan (PIP) well in advance what is required by law. An agreed PIP extends the period of exclusivity protection by two years (i.e. to 12 years in total).

Lysogene is currently advancing pre-clinical studies in MPS IIIA to achieve marketing approval. Advances in the clinic, in combination with the regulatory designations and incentives attracting investors and partners, has positioned Lysogene to regard their current pipeline and platform as a strong cornerstone of a continuum of next-generation gene therapy technologies and capabilities. 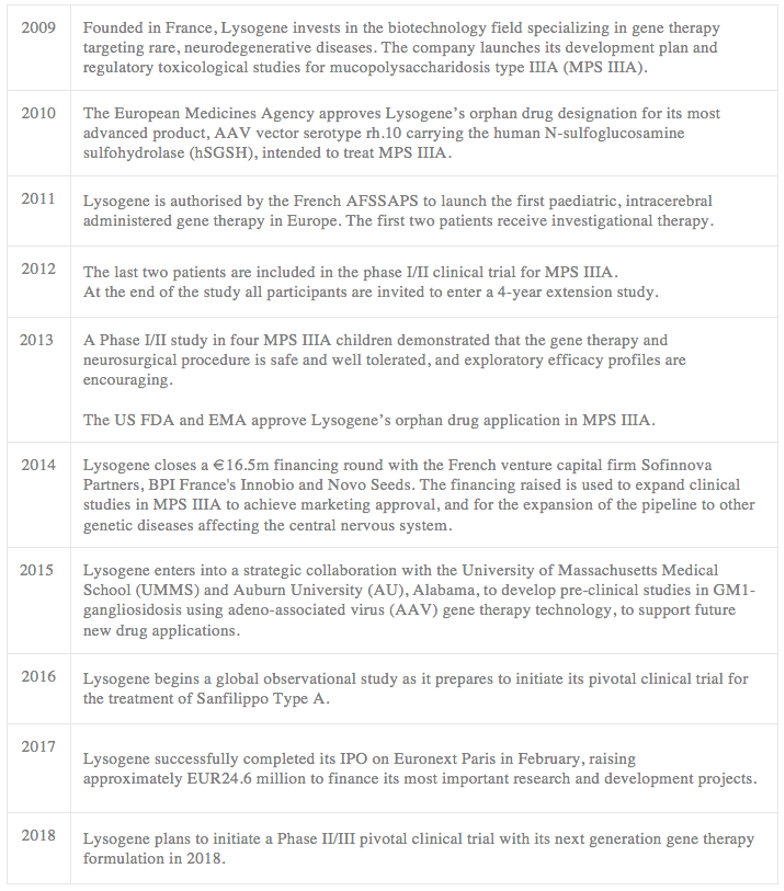